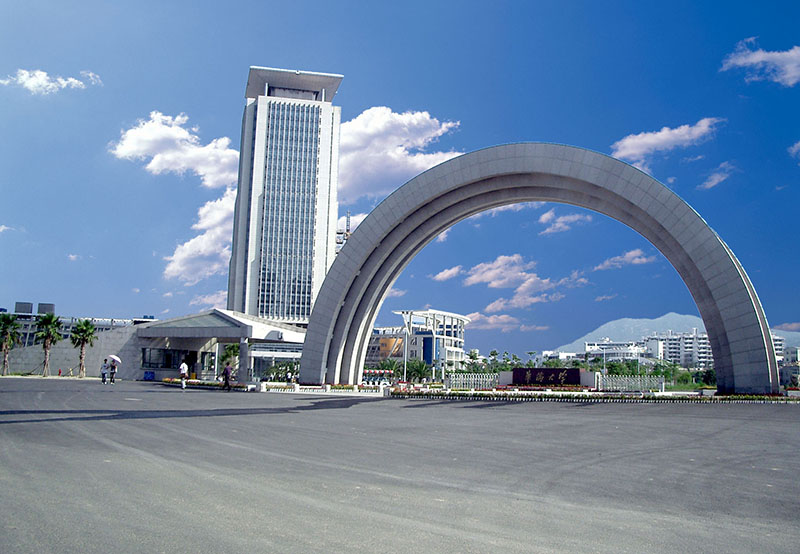 Huaqiao University, headquartered in Quanzhou City, Fujian Province, is directly under the leadership of the United Front Work Department of the Central Committee. It is a central ministries university approved and established by Premier Zhou Enlai. The central government has identified it as a "National Key University".

The school has two campuses in Quanzhou and Xiamen, Nanyang College in Singapore, an overseas Chinese education base in Barcelona, Confucius Institutes in Bangkok, Phuket, Vienna and other places, and 77 offices or enrollments on five continents. Institutions; There are 25,551 full-time ordinary undergraduates, 5,953 graduate students, and 4,969 overseas Chinese, Hong Kong, Macao, Taiwan and foreign students from more than 50 countries and regions. It is one of the universities with the largest number of overseas students in the country. There are 57 teaching and research platforms at the provincial and ministerial levels, 1 national key discipline, 40 provincial and ministerial key disciplines, and 3 disciplines have entered the top 1% of the ESI global ranking.

The school insists on cultivating people by virtue, and vigorously cultivates high-quality talents with innovative spirit, practical ability, international vision and social responsibility. A total of more than 200,000 talents of various types have been cultivated, of which more than 60,000 are distributed in Hong Kong, Macao, Taiwan and overseas. They have become friendly messengers to promote Sino-foreign exchanges and cooperation. There are 27,101 full-time undergraduates, 5,486 graduate students, and 7,070 students from Hong Kong, Macao, Taiwan and more than 90 countries. It is one of the universities with the largest number of overseas students in the country. There are 26 colleges and 90 academic departments (departments, centers). There are 18 national first-class undergraduate majors, 26 provincial first-class undergraduate majors, and 17 majors have passed international and domestic professional certification. There are 18 national first-class undergraduate courses and 120 provincial first-class undergraduate courses. There are more than 80 teaching and scientific research platforms above the provincial and ministerial level, such as the National and Local Joint Engineering Research Center, the Provincial and Ministerial Collaborative Innovation Center, the Ministry of Education Engineering Research Center, the Virtual Simulation Experiment Center, and the Experimental Teaching Demonstration Center.

The school strengthens the construction of disciplines, and forms a discipline layout of infiltration of arts and sciences, integration of science and engineering, coordination of engineering and management, and coordinated development, covering 11 disciplines. At present, there are 9 first-level discipline doctoral programs, 26 first-level discipline master programs, 22 professional degree master programs, and 5 post-doctoral mobile stations. There are 41 national, provincial and ministerial key disciplines and 17 peak plateau disciplines in Fujian Province. Engineering has entered the top 5‰ of the ESI world rankings, and the three disciplines of chemistry, materials science, and computer science are among the top 1% of ESI.

The school attaches great importance to academic research, and continuously enhances its scientific and technological innovation and cultural innovation capabilities. The number of projects funded by the National Natural Science Foundation of China and the Social Science Foundation of China ranks among the top universities in Fujian Province every year. The scientific research achievements have been awarded the National Science and Technology Progress Award and the Outstanding Scientific Research Achievement Award of Higher Education Institutions. The relevant academic papers have been published in journals such as "Nature" and "Chinese Social Sciences". For four consecutive years, it has entered the top 100 national top 100 in the annual list of the Nature Index. Two professors have been continuously selected as the world's "Highly Cited Scientists" list.

The school vigorously promotes international exchanges and cooperation, and has signed cooperation agreements with more than 250 universities, scientific research institutions and government departments in 42 countries and regions on five continents. As a Chinese government scholarship to study in China, it has established 130 service or admissions institutions around the world.

The school adheres to the school-running policy of "facing overseas, facing Hong Kong, Macao and Taiwan", adhering to the school-running purpose of "serving overseas Chinese and spreading Chinese culture", implementing the school-running philosophy of "connecting with China and foreign countries, and cultivating morality and talents", and strives to serve the country's overseas Chinese affairs and public diplomacy work to help the construction of the "Belt and Road". The "Blue Book of Overseas Chinese" has been published for 11 consecutive years. The Maritime Silk Road Research Institute has been selected as the most influential university think tank in the "Belt and Road" of the National Development and Reform Commission for three consecutive years, and has been selected as the "Belt and Road" research characteristic think tank of the Chinese Academy of Social Sciences Evaluation. The Thailand Research Center was selected as the National and Regional Research Center of the Ministry of Education, the Malaysian Research Center was selected as the “Belt and Road” National and Regional Research Center of the National Ethnic Affairs Commission, and the Overseas Chinese Research Institute and the Urban Construction and Economic Development Research Institute were selected as key think tanks in Fujian Province. To promote people-to-people bonds, we have held "Chinese Learning Classes for Foreign Government Officials" for 16 consecutive years, and cultivated a large number of outstanding talents dedicated to promoting Sino-foreign friendship for countries along the "Belt and Road". Vigorously promote Chinese education, train teachers, write textbooks, and experience traditional Chinese culture for more than 570 Chinese schools in 55 countries around the world, and help the standardization, formalization and professionalization of national Chinese education.